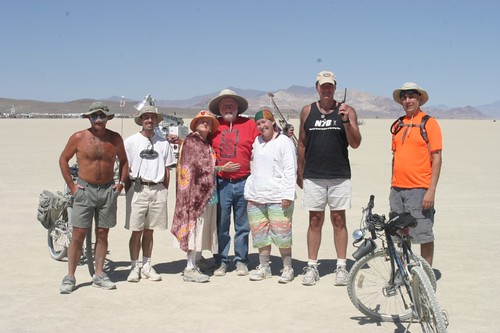 After talking to several amateur radio operators during my week at Burning Man I overheard two people who were going to have a meeting near the “tripod statue” … the “War of the Worlds” statue. So I grabbed my radio, jumped on my bike, and headed out in that direction. It was pretty easy to spot someone talking into his HT, so I headed in that direction.

First there was one, then the two of us, then three… then out of the woodwork, four, five, six then seven! Even though we talked on the noon net every day, we’d never actually organized an official meeting, and just by hearing each other talking, we ended up with seven in just a few minutes.

Thanks to all, and I look forward to the Playa again in 2007!