For those interested in hearing about the Santa Cruz ARES Ham Radio response to this week’s communications outage in Santa Cruz, San Benito and Santa Cruz Counties. The cause of the outage were multiple cuts in the Fiber Optic cables which ended up shutting down almost all land line telephone, cellular and internet connections in most areas of the three counties listed above. This brought down our 911 dispatch system, hospital to hospital communications, ATM and Credit Card transactions. Comcast was the only provider I’m aware of who’s telephone, cable TV and internet stayed up throughout the event.

I noticed I had no cellular phone service around 0645 hours local, but still had internet (wifi via Comcast) so figured it was a local problem. Around 0745 hours Ellen got ahold of me via our Comcast landline as she was just finishing her shift at the hospital and let me know it was county wide. I turned on the radios and checked in to the Resource Net letting them know I would be available after 1000 hours. I monitored both nets as I drove to Watsonville to meet her.

When Ellen and I had finished up our first baby appointment in Watsonville (Yay! Babies!! She was 6 & 2/7ths weeks on Thursday we learned from our first ultrasound.) I went back home with her, packed my gear, and checked back in to the Resource Net at 1030 hours. Went to the office, set up a quick antenna outside and brought my radio in to the office figuring it might be hours before I was needed. About five minutes later they called me up and requested me at Sutter Maternity and Surgery Center.

I was at Sutter from approximately 1130-1645 hours and was quickly joined by two other volunteers: Kent, AB6KB, and later Barry, KI6QWQ. Mostly we monitored the events going on between the other served agencies and gave information to hospital staff. We were able to pass their large food order via radio to Monterey, where they still had phone service and they relayed the order to the vendor. We were preparing to place an order for their pharmacy as well but they were able to place that via another method.

My primary setup was my Yaesu FT-817nd with the antenna lead heading out a propped open door, I raised my 20′ fiberglass Jackite pole with my Larsen antenna that I usually use mag mounted on my car up on top of it. I also used my Kenwood TH-F6A for monitoring other frequencies (police, fire, and news media). My 5 watts hit all of the necessary repeaters with no problem, if I’d needed more power I had my 35-watt Mirage amplifier and a DieHard Portable Power 750 12-volt power source in the car.

The event taught me a lot about what pack in my “Go Kit” and that I really do need to build up a better collection of things that are ready to go on a shorter notice… I spent time around the house taking down an antenna, gathering antenna cable, extension cords, my battery backup, my antenna mast and mount, etc. I should really have a kit ready to go, even if it requires me to purchase a few duplicate items (antenna cable ready to go instead climbing through my attic taking down my current setup for example)

I had been playing with my Yaesu FT-817ND for a while, but not really using it very much on VHF/UHF, primarily because I hadn’t programmed very many of the local repeaters in to it.  As with any radio, I really dislike programming a lot of memories in to them via their on device programming methods (tiny buttons, little knobs, one digit at a time, etc)

On my Mac, for my Kenwood radios I have been a very happy customer of MacMemoriesManager for a number of years. “What?” you say? A Mac?  I thought this guy was a ham radio operator?  We all know Hams use Windows (preferably Windows 3.1 or Windows 98 right?) or Linux!

Well, the Macintosh platform is continuing (although slowly) to grow for amateur radio, I really thank those Mac developers, I know they would sell more software if they sold to the larger community, but with the high quality designs Apple has been putting out over the last few years, more and more hams will be switching, especially as quality software is available for them.

Okay, enough of me praising Apple, back to what I was talking about.  So I wanted to start programming frequencies to the FT-817, so I headed over to eBay and found a USB data  cable for it from 409Shop.com who goes by the name RadioFactory on eBay. 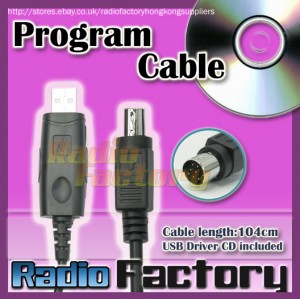 I received the cable and a small cd with drivers on it. I never opened the driver CD as I’m sure it was Windows only, and those tiny CD’s won’t work safely in slot loading cd players I don’t think. Didn’t need it anyways, I already had my USB driver installed since I use similar cables for my Kenwood radios.

So I connected up the radio and the cable and fired up MacMemoriesManager… and nothing happened. I’ve been consistently frustrated by the 817 since it seems so foreign to the way the Kenwoods work… somehow the Kenwoods just make more sense to me. As I use the 817 more I’m sure I will get used to it.  But here were the major hurdles I was experiencing while trying to load memories:

First, it kept saying the radio couldn’t be found. Apparently the radio has to be in VFO mode, not memory mode to be programmed.

Second, I got it to connect, but only about one in five of the memory channels would get programmed successfully, garbage data was being written to the file, sounded like a baud rate issue.  I reduced the baud rate to 4800 in MacMemoriesManager, and also reduced the rate on the radio and data started flowing perfectly!

To change the baud rate on the radio, turn the radio on, push and hold the “F” key, navigate to menu item 14 using the SEL knob, then choose 4800 for the rate, then push “F” again to get back to your regular modes.

One of the things I really like about using MacMemoriesManager is that since I already had all of my frequencies programmed for the Kenwoods, I was able to open up that memory file, switch the radio to use in the software, and then send those frequencies right back in to the 817 so frequencies can match across all three of my radios and I never had to type them back in again.

Only downside was… the 817 doesn’t receive 220 MHz, and won’t receive the fire department frequencies I use most often, so I had to delete all of the frequencies from the memories that were outside the receiving range of the 817. A wider band receive sure would have been nice for this, I guess I’m just spoiled by my Kenwood TH-F6A!