Sure, it’s been like two years since I posted anything, but I did actually pull out my Arduino and started refreshing myself on how everything worked. It had been so long I had to reinstall the Arduino software and the serial driver for the old Arduino Diecimila. 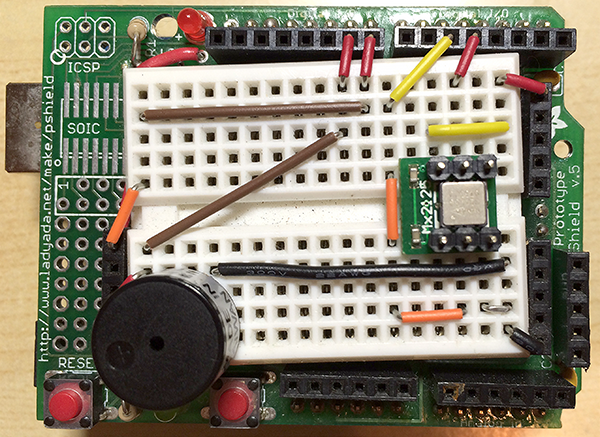 I started back up on one of the last projects I had worked on. Having lived in California most of my life, earthquakes were always on my mind, so the idea of having an early warning network in the state was always something of interested to me.  Similar to the promises of an inexpensive flying car, public space travel and hoverboards, it seems like one of those things that will not happen in the near term.

Funny thing is, people manually typing “Earthquake, OMG!” in to Twitter can actually travel fast enough to give others warning, so why not build something automatic?  Back in 1989 after the Loma Prieta earthquake when I was still regularly using Bulletin Board Systems (BBS’s, like Deeptht, Gorn and The Omni) I had the F12 function key on my computer programmed with “Earthquake!” to notify those I was chatting with that another aftershock was on it’s way to them. I believe it was 20-30 seconds between Santa Cruz and San Francisco.

All that to say, now that I have moved to Oregon at first glance I was relieved… no more worries about earthquakes, only these volcanoes that surround me and they don’t move all that often.  Then I learned about the Cascadia subduction zone and it’s very real potential of magnitude 9+ Megathrust earthquakes. Now I’m reading a great book on the topic, Cascadia’s Fault, and learning more about it.

And that of course has all brought back my interest of receiving an early warning when that fault actually lets loose. Not counting capture/sensor and transmitting/receiving delays, there should be somewhere between 30-40 seconds warning before the shaking actually arrives here.

I had already started working with an Arduino with a dual-axis accelerometer so today I started working on it again.  I had seen a GitHub project from someone in Seattle, the P-Wave Detector that uses the Quake Alarm detector tied with an Arduino to send out text messages to anyone who subscribed.  Even with one detector in Seattle (if it’s even still online in the three years since he posted it) it would give me approximately 155 seconds of warning, and of course the shaking would be greatly reduced due to the distance traveled.

So, I’ll keep working on this little project, and if I build something that I think would actually work well enough to deploy I’ll contact my friends along the Oregon/Washington coast (Brookings, Coos Bay, Eugene, Portland, Vancouver and Seattle) and place sensors there for testing.

Maybe in a few years I’ll step off of my Hoverboard and write another post on how the project is coming along ;-)